If you are on a hunt for a sturdy power that supports more than the standard non-commercial weight limit, then you're in luck. The Sportsroyals power tower is exactly that.

The Sportsroyals brand is not as big as many others in the industry, but they do manufacture several different types of fitness equipment, like vertical climbers, adjustable roman chairs, and power towers. Today, we're here to focus on their top-selling power tower.

This particular tower has been on the market for some time now, but it has managed to remain under my radar (check out my top power tower list here) - until now. In this review, I'll cover all the features of the Sportsroyals Power Tower, pros and cons, and whether or not it's worth your money.

The frame of the power tower is made of 14-gauge heavy frame square steel with scratch-resistant coat finish. The frame's base is H-shaped with 8 support points, which are formed by the extended steel. The tower's sturdy construction is its #1 selling point, and I found that it was perfectly stable for my weight and height.

Because of the steel construction, the tower's dip station can support 400 lbs (181.4 kg) of weight. Instead of the classic weld design that's typical in similar towers, this one uses safety locknuts to keep the screws tightened for minimal shaking. While performing dips, I noticed no shaking at all - at least not from the tower!

The angled pull-up bar is 41.2 inches (104.6 cm) long and has 4 hand-grip positions. These can be used for pull ups, chin ups and muscle ups. It does not come with front bars, but that didn't stop me from doing a range of different workouts to target my arms, core, shoulders, chest, and back.

At the bottom of the base you will find push-up bars, which are pretty standard. If you have short arms, they may be slightly too wide for you to comfortably push up, but there are plenty of other ways to get in an upper body workout.

Looking for a complete home gym? Check out this guide

As soon as I jumped on this tower, I came to the conclusion that Sportsroyals put a lot of thought into the design and comfort of the backrest and armrests. The armrests are slightly inclined (10 degrees) to prevent elbow slipping and the backrest can be adjusted in 7 different positions.

I really love that the height of the tower can be adjusted to 6 different positions, ranging from 64.56" to 88.18" (164 to 224 cm). My partner, who is slightly shorter than me, was able to change the tower's height by adjusting it to a shorter height, and it only took about 30 seconds to make the change. 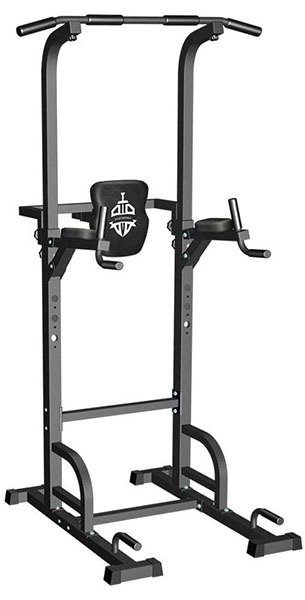 My Personal Experience With the Sportsroyals Tower

As soon as I received my power tower, I opened up the box and started assembling. The assembly is pretty straightforward, but I feel that the instructions could be better. Most users say that it took about 90 minutes to put together, but since I've assembled similar towers in the past, I was able to do it in about an hour.

All the bolts and hardware are included with the tower and come neatly organized. If you need help with the assembly process, check out this video:

After assembling it, I put the tower to work - meaning I put myself to work! I immediately felt satisfied with the sturdiness and stability, and even though I'm not 400 pounds, I believe that the 400-pound weight limit is legit, especially considering the well-placed steel pipes at the tower's base.

At first, I was a bit nervous about the angled elbow/arm rests and wasn't sure about slipping, but the 10-degree angle is actually a really nice touch to prevent slipping. The armrests are super comfortable, and the same goes for the backrest.

To be totally honest, I was slightly disappointed with the pull-up bar. It's a standard bar, and even though it’s angled nicely and plenty long, I personally miss the front grips. I can't imagine that it would be that hard to add, though.

With the pull-up bar at the highest setting, I experienced a small amount of shakiness, but not enough to say that this power tower is in any way unstable. If you're worried about this, you can always add more support by placing something heavy on the base.

Pros and Cons of This Power Tower

Now that we've reviewed every feature the Sportsroyals power tower has to offer, let’s go over the most significant pros and cons:

Conclusion – Is Sportsroyals Power Tower Worth It?

It's not every day that I can confidently say "Yes, it's worth the money." But in the case of the Sportsroyals Power Tower, the answer is yes.

Even though this tower isn't perfect - e.g. the missing forward grips on the pull-up bar - it's still a great piece of equipment. It's stable, sturdy, and highly adjustable to accommodate a range of different heights and comfort needs.

Want to consider other models - Take a look at these options from popular brands.