Spotters are an excellent way to manage your safety in the gym, especially when powerlifting. Though most people understand that using a spotter is a must when doing bench presses, they may not realize that you should also use a spotter on other exercises such as squats, pull-ups, and deadlifts.

Today we’re going to help you answer the question ‘which types of lifts require spotters’ once and for all.

What Is Spotting In Weight Training?

Spotting is the practice of shadowing another person while they do weight training. The spotter makes sure the person lifting the weights is doing everything correctly and that they don’t injure themselves. The spotter also concentrates on the other person’s technique to make sure they don’t get hurt.

Spotting is a crucial part of weight training. When spotting, you are responsible for the weight that is being lifted. Spotting is a great way to help a friend feel comfortable with a certain weight and a great way to learn how to properly learn a new technique. 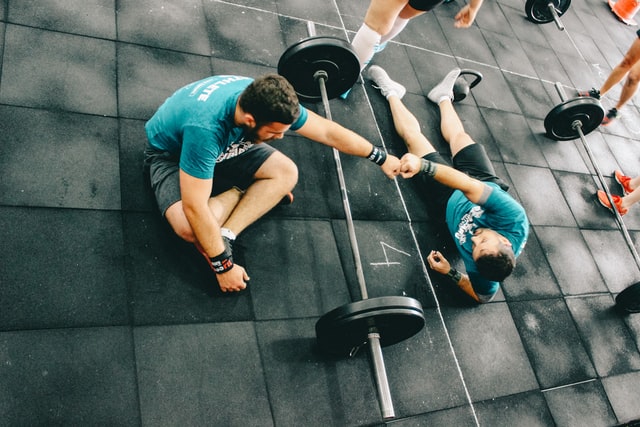 The Importance Of Having A Spotter For Weight Lifting

If you’re going to be lifting weights in the gym, it’s important to make sure you have a partner with you who can spot you. If you’re lifting weights that are too heavy for you to manage, your partner should step in and help you get through the lift safely.

Here are some of the most important reasons you should have a spotter:

Having a spotter is crucial for safety in the gym. If you’re using free weights for bench presses, your spotter can help you lift the weight, and then he/she can be there to help you lower it down.

When weight training, you’re often encouraged to push yourself to muscle failure, and the last thing you want is a heavy weight above your head when your muscles fail.

It can be challenging to motivate yourself to work out, especially when you're first starting out. One of the best ways to avoid feeling like you are exercising alone is to work out with a friend.

A friend can spot you while you're lifting weights, which means you can push yourself harder than you would if you were working out alone.

If you’re trying to learn a new exercise or improve your fitness routines, it helps to have a spotter. This is especially true for people who are just starting out with weight training. Your spotter will help you with your form, so you don’t have to worry about getting injured while you’re learning the exercise.

If you have a training partner, it is much more enjoyable, and you will be more likely to stick with your routine. Having a spotter also means you can push yourself harder than you would if you were working out alone. 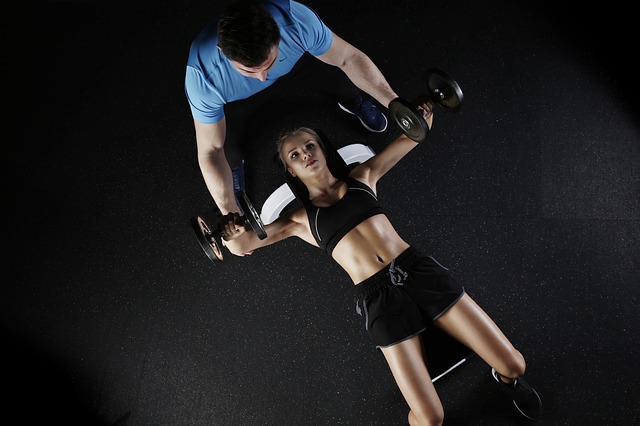 When you’re spotting someone during the deadlift, it’s mostly to help them perfect their form. Typically if someone is struggling with a weight during a deadlift, they will drop the barbell, and trying to catch that as a spotter will probably result in injury.

Instead, stand well back and provide guidance where necessary.

The most obvious thing to look for during a bench press is how someone’s body looks while they’re doing it. If their back is rounded and their butt is sticking up in the air, that’s a huge red flag.

You can tell if someone is using proper form during bench press if they’re keeping their elbows tucked in and their shoulder blades pinched together. If the elbows are flared out or the shoulder blades are relaxed, that’s a sign that you're using poor form, and you can get shoulder issues from it.

Most spotters stand behind the lifter during a bench press, poised to grab the weight if necessary. 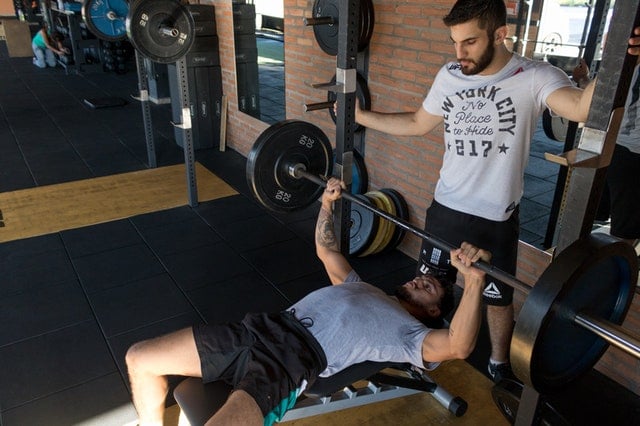 During a barbell squat, it’s important to keep your chest up and your back straight. If someone is doing a squat incorrectly, there are a few telltale signs. The most obvious is if their knees are buckling inwards or they’re letting their knees cave inwards.

Spotting a barbell squat usually requires two people, one at each side of the weight. If the lifter struggles, each of the spotters can grab the barbell allowing the lifter to safely move out of the way.

Skull crushers are a great exercise for developing the triceps. If you’re working with someone who is struggling with the movement, you can help them by supporting their elbow as they move their arm. Often, a little nudge is enough to help someone push through with the rest of the movement.

To help someone during dumbbell military press, stand behind them and watch for muscle fatigue. If you notice them struggling, you can step in and push the dumbbells up as they raise them above their shoulders. It's important to make sure you push the dumbbells directly up and don't push them inwards or outwards.

If someone is struggling with pull ups, the best way to help them is to stand directly behind them and place your hands around their waist. This will allow you to support most of their weight as they do the exercise. Make sure you maintain a firm grip around their waist, so they don't fall.

What should you do if you don't have a spotter?

If you don't have a spotter, it's crucial that you pay attention to your form and make sure you're working with a weight that you can handle.

If you're doing a move for the first time, you don't need to add a lot of weight. You can always work your way up to the full weight. Also, consider using assisted machines which can be a lot safer when you don’t have a spotter.

How do you become a lifting spotter?

How do I get gains without a spotter?

Let’s make this clear. You absolutely do not need a spotter to make progress in the gym. Yes, you may be able to lift heavier, but there are a bunch of exercises that you can do that don’t necessarily require one, and these exercises are great for piling on the muscle.

Instead of using free weights, consider using assisted weight machines such as the chest press machine.

Do I need a spotter for squats?

Spotting isn’t essential, especially if you’re working out at home or using a lighter weight. But if you’re going to be using heavier weights or doing repetitions, then it’s definitely a good idea to have a spotter.

How can I be an effective spotter?

If you want to be an effective spotter, it’s important to be patient and attentive. Remember, being a good spotter is not about being right or wrong. It’s about being helpful.

You’re not trying to show how smart you are or how much you know in the gym; you're trying to get the best out of the person and help them have a productive gym session.

While you can do many exercises without a spotter, there are a lot of great reasons to use one. One of these reasons is motivation — if you're having trouble completing the last few reps of an exercise, your spotter can help push you through those last few.

Another reason is safety — if you fail on an exercise (whether due to improper form or just plain weak muscles), your spotter can help prevent you from getting injured. Whether you use a spotter is a personal choice, but we definitely think it’s beneficial.