If you are looking for an affordable, yet sturdy spin bike, then you might want to consider VIGBODY exercise indoor bike. This particular bike caught my attention mainly because of the affordability and positive ratings.

So I’ve taken the liberty to check review by review from across 3 different portals to see if they are legit and not counter-productive. After that, I’ve decided to put together a summary review from all the verified owners combined.

VIGBODY brand is not very well known, mainly because so far they make only 2 different exercise bike models and push-up bars. This review is about the first, older model, with the rounded base.

So without further due, let’s check out the features.

The bike’s frame is made of heavy-duty square tube steel and comes with a heavy-duty, yet a bit lightweight, bi-directional 24.2 lbs (11 kg) flywheel. According to the manufacturer, the bike supports up to 330 lbs of weight (149.7 kg).

The bike uses a combination of belt-drive and friction resistance system, which can be adjusted via a conveniently located tension knob. It features a standard LCD monitor which offers all the basic stats like distance, speed, time, scan, calories burned and odometer.

The bike is also equipped with transportation wheels, which are located at the front bottom base. Empty weight of the bike is 64 lbs (29 kg) and the warranty is 12 months. 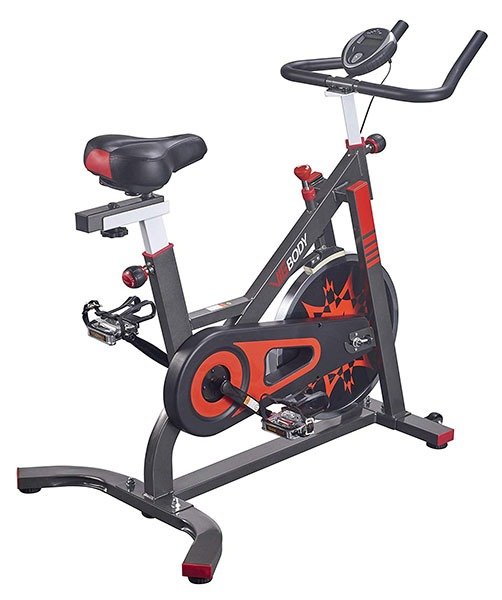 Well, that concludes the features.

The assembly of the VIGBODY exercise indoor bike is quite easy, with the provided instruction manual it shouldn’t take your more than 30 minutes.

Overall, the bike is quite sturdy, the quality steel frame and the rounded base make the bike perfectly stable. I have no problem believing that the weight support of 330 lbs is a real deal. With that being said, considering the 64 lbs bike weight, if you are above 310 lbs I would suggest checking out some higher-quality alternative, just to be on the safe side.

Thanks to the combination of friction resistance and belt-driven systems, the bike is very quiet. If you want to watch TV during your exercise, then you are in luck with VIGBODY exercise indoor bike, because with standard chain-bikes watching TV while exercising is next to impossible.

The LCD monitor is pretty standard and rather cheap-looking, but it does the job. It can display only one stat at a time, so you have to switch from stat to stat if you want to track complete data.

Several users reported issues with pedals, especially left pedal falling off after the assembly or after several days of use. While the pedal installment system could be better, it appears that most of these issues come with wrong pedal assembly.

Regarding the seat, several users reported it being uncomfortable, however, good news is that you can easily replace it. It all comes down to how sensitive your butt really is.

Here is the summarization of pros and cons of VIGBODY exercise indoor bike.

Is VIGBODY Exercise Indoor Bike Worth It?

This is one quiet, sturdy and affordable bike. While the pedal installation is not straight-forward and the LCD monitor is rather cheap-looking (my personal opinion), it’s still a good-quality bike, especially for the price. I don’t see any particular reason why VIGBODY cycling bike shouldn’t be your winner.

If you would like to get your hands on something of a commercial quality, then I’d suggest checking out pooboo C505 spin bike. You can also check our complete spin-bike guide.