Even though the FLYBIRD brand has a fairly small product portfolio and isn't very well-known, the FLYBIRD Adjustable Weight Bench is a piece of equipment that's certainly worth reviewing.

The company only specializes in weight benches and waist support straps, which means they've been able to place all of their focus on a small offering of gym equipment.

I can't say that I personally purchased this product for my home gym (can’t have all the benches in my house, right?), I was able to use the FLYBIRD extensively at my local gym. And I must say, I was pleased with its performance.

In this review I'll be covering all the good (and bad) I experienced when using this weight bench, so let's get down to it!

Main Features of the FLYBIRD Bench

As the name suggests, the bench is highly adjustable with 3 seat-position adjustments and 7 back-position adjustments. According to manufacturer, the max user height is up to 6’2″. The bench is considered stowable and gives users the option to lean it against a wall or slid it under a bed to save floor space.

The entire construction is made of heavy-duty commercial steel and can support up to 700 pounds of weight. This is an insane weight capacity, so it's a great choice for weight lifters who are interested in pumping some serious iron. 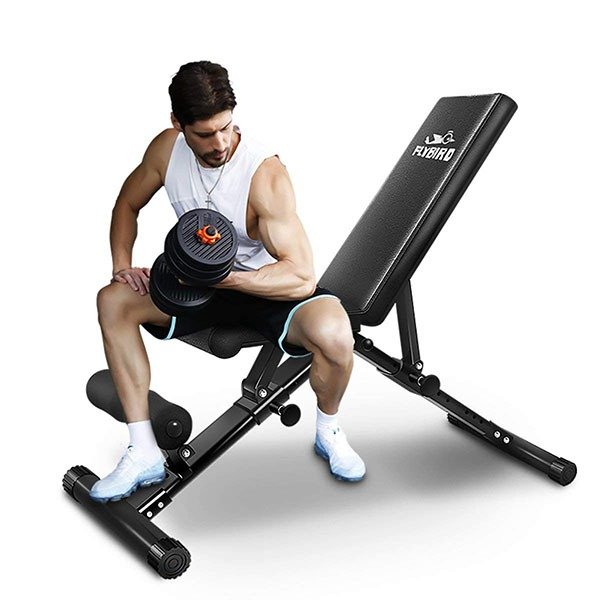 According to the gym owner who originally purchased the FLYBIRD, the bench arrived in two boxes and came nearly-assembled.

The packaging was good and the leather was protected well. You'll need to spend about 30 minutes assembling the bench, and this can easily be done by one person.

Just be sure to check the pre-tight screws before you start using the FLYBIRD. Some of them might got loose during shipping, so just to be safe, go through and tighten all the bolts/screws before using.

My Experience Using The Flybird

The bench was relatively new at the gym, so I was lucky enough to be one of the first ones to use it. From the first look, the bench appeared to be sturdy. Once I sat on it, that theory was confirmed. Even in my early reps with heavy weights, I felt stable and secure the entire time using the FLYBIRD.

The positioning system is quite standard with sliding brackets and the usual bolt pins to secure the adjustments. To be honest, there is nothing overly special about the positioning system, but I do love that back can be adjusted to 7 different positions to accommodate a lot of different exercises.

The bench itself is well-padded and comfortable and the pad is large enough to comfortably hold even bulkier people.

However, I found the seat bottom to be a little bit unusual compared to other weight benches I've used. It is longer than most benches, so if you are in the sitting position, expect to have several inches of the seat stretching out in front of you.

The FLYBIRD adjustable weight bench is surprisingly very lightweight and weighs just over 28 pounds. This is usually a red flag for heavier weight lifters, but according to the manufacturer, it can hold up to 700 pounds.

I can't say personally whether or not the 700-pound limit is legit, but from my experience, I'd say that it's a legit claim. No matter how hard I was going with my gym sessions, the FLYBIRD remained stable and sturdy the entire time.

Regarding the decline position, I don't love that it has only one, and this position might be kind of steep for some users. Since I’m of average height (about 5’10” on a good day) the positioning was OK for me, but honestly, it might be problematic for people who are over 6'.

So while the manufacturer states that this particular model accommodates users up to 6’2″, I’d say that the limit is truly 6' based on the short decline position.

Okay, as with any other product, this fella has its pros, but some cons as well. Here's what they are:

Should You Get The FLYBIRD Weight Bench?

Is FLYBIRD weight bench worth buying? It depends. If you are under 6' and not overly bulky, then this bench is definitely worth purchasing. If you meet those conditions and want something for your home gym, then go for it! But if you're looking for a weight bench that's suitable for a commercial/shared gym, it might be better to go with a commercial-grade bench instead.

If you would like to get your hands on something fully commercial, then I’d suggest checking out adjustable bench by Ironmaster or browse through our guide on the best adjustable weight benches.