Few purchases can be more rewarding physically and emotionally than an exercise bike. For as great as getting on your bike and riding around the great outdoors can be, that isn’t always feasible.

Sometimes the weather is terrible, sometimes you’re stuck at work or need to watch the kids at home, and sometimes you just don’t want to get into your riding gear and go out on your bike, but you still want to work out. The greater level of fitness and sense of achievement you get from going all out on an exercise bike can be truly profound, and can be a great way to start your day or add some midday juice to your daily routine.

The Exerpeutic LX7 Training Cycle is one exercise bike that is gaining more attention of late. What’s behind that buzz, is it merited, and is this exercise bike right for you?

This exercise bike features a steel frame and is highly durable. The Exerpeutic LX7 measures 49 inches by 20 inches by 47 inches and has a maximum weight capacity of 300 pounds, which is on the high side.

That said, the steel frame also makes this unit a bit heavier than others, which can make it difficult to assemble on your own, especially if you don’t have a lot of upper body strength.

On the flip side, however, the bike does come with most of the components necessary for assembling it, so you don’t have to worry about having the right tools. If you can lift the heavy parts, or have someone on hand who can help, assembly should go quickly.

Once you put it together, you get to enjoy the exercise benefits of a 40-pound flywheel. This is a good weight for an exercise bike flywheel for beginners and casual learners. It is not so lightweight as to not offer a challenge, but isn’t as massive and heavy as some of the larger flywheels. Even if you are an experienced rider, 40 pounds is a good amount of resistance to work against.

The flywheel itself is made of cast iron and chrome. The bike allows users to stand while pedaling, helping to simulate the experience of riding uphill.

The bike has a three-piece crank system and chain drive. This makes double direction pedaling possible. The pedals themselves are made from an aluminum alloy and feature cages so as to keep your feet in place while pedaling.

A common problem with exercise bikes is that they can sometimes rock back and forth during intense pedaling sessions. While this bike does vibrate a bit, floor stabilizers keep it in place, preventing your bike from sliding across the floor.

This bike also comes with an adjustable bike seat and handlebars. When riding, it is vital that you make sure your legs and arms are perfectly aligned with the bike, and these adjustable features do a good job of facilitating that. Soft foam covers the handlebars, which feature multiple grips that allow you to position your hands however you feel is most comfortable.

The handlebars are especially notable for having heart rate sensors built into them. Heart rate is one of the most measured statistics for exercise bike enthusiasts, and this model does a good job of making it easier than ever to get that data.

Moreover, it displays that and other data clearly on the LCD monitor located between the two handlebars. The monitor can display a wide range of vital stats, including heart rate, calories burned, speed, distance traveled, and other standard measurables.

What Do Users Say? 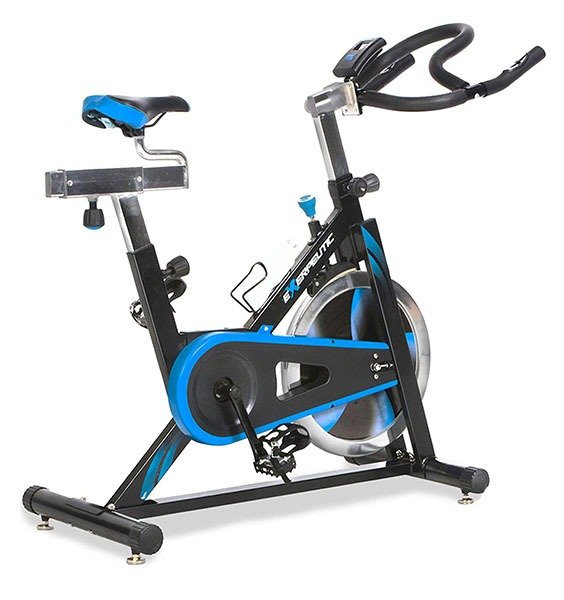 Exerpeutic LX7 a very no-frills bike. What you see is what you get.

On the one hand, that can make for a bike experience which isn’t as advanced as other models, and we’ll look at some of those potential shortcomings in a moment.

That said, this bike does deserve credit for being very accessible. It isn’t hard to figure out, which allows you to get into your exercise routine that much more quickly, and that – along with the 40-pound flywheel giving good resistance – is what really matters.

In that respect, the riding experience is mostly a positive one. The bike rides very smoothly, without jerky stop-start motions, and the resistance level is easy to adjust.

One thing to note about this bike is that it is a bit noisier than other alternatives on the market. The model can vibrate a little while you bike, and while this shouldn’t be too distracting from a riding perspective, it generates added noise. That said, while this isn’t the quietest exercise bike on the market, it is far from the noisiest.

Another thing to note is that the bike seat can be a bit hard and narrow. The good news is that it is realistically modeled after a real bike seat, albeit a bit harder, so if you’re looking to train “on the real thing” indoors, for better or for worse, this bike seat fits in with that. That said, if you want a more comfortable bike seat, this one is replaceable.

What’s more, unlike many exercise bikes today, the seat and controls are not water resistant, so if you sweat up a storm during sessions, you’ll want to make sure you’re wearing sweat guards so as not to damage the unit.

Conclusion – Is Exerpeutic LX7 Training Cycle Worth It?

The Exerpeutic LX7 is a perfect example of a no-frills exercise bike that has it where it counts. There are definitely more advanced options on the market, though the handlebar sensors are a nice touch.

The seat may not be as comfortable as that of other bikes, but at least it’s replaceable. On the whole, however, this is an extremely sturdy bike with a high weight capacity and a solid flywheel and resistance capability.

You can get a very good workout on this exercise bike, and in the end, that’s what really matters.

If you would like to get your hands on a similar bike, yet with 330 lbs weight support, check out Cyclace indoor bike. You can also check our complete guide on affordable exercise bikes.