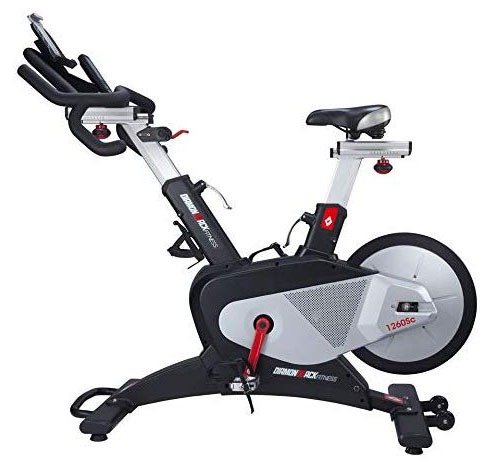 Bike riding is one of the central experiences of modern life. We say things are “as easy as riding a bicycle,” essential skills, loving someone is akin to riding “A Bicycle Built for Two,” and if you aren’t getting anywhere, well, you’re simply “spinning your wheels.”

Of course, that last phrase was invented before stationary bikes really caught on in popularity. Even so, they still apply, because while you may not be physically going anywhere while riding a stationary bike, you still like to feel like you’re “getting somewhere” and making progress in your exercise regimen.

Enter the Diamondback Fitness 1260Sc Studio Cycle. Will it leave you “spinning your wheels” in frustration,” or will you feel like you’re really “getting somewhere” with the exercise opportunities it offers?

As for the bike itself, it features a 31-pound flywheel. The amount of resistance a flywheel offers is tied in part to its weight, and 31 pounds is a happy medium. It isn’t as heavy as some of the other options on the market, nor is it light and flimsy. It can offer enough resistance to make your ride challenging without making it feel like you’re pushing against a block of concrete.

The design of the bike is very streamlined, but the bike is nevertheless quite durable. Assembly is also quite straightforward, you can check the assembly video guide below:

This is a magnetic resistance bike. While there are pros and cons to these types of stationary bikes as opposed to traditional friction options, one nice thing about them is the fact that they tend to operate more silently than their friction-based counterparts. Such is the case here. Riding this bike should not make a lot of noise, which is a definite plus if you live with others and don’t want to disturb them while riding on your stationary bike.

This stationary bike also makes things easy on you when it comes to adjustability. Few things are more annoying when riding a bike than finding it isn’t a good fit. Maybe it is too big, maybe it is too small, and maybe it’s just that way at the moment because someone else in your home uses the stationary bike as well and they’re considerably taller or shorter than you.

Thankfully, this stationary bike from Diamond Fitness takes the hassle out of adjusting your stationary bike. You can adjust the height, saddle position, and handlebar positioning, making it that much easier to ride in comfort.

The first feature many users notice about the Diamondback Fitness 1260Sc Studio Cycle is how much resistance it offers. As noted, it has a 31-pound flywheel, but it goes a lot further than that by offering an impressive 16 levels of resistance.

That gives you an enormous amount of control over how much resistance you are pedaling against, which in turn can make for a much more productive exercise regimen. You can really put the pedal to the metal and work at the highest levels of resistance before cooling down with a light ride, all without having to stop and fiddle with the settings. Simply switch between the 16 settings as desired, and you’ll be able to customize your ride to your heart’s content.

In addition, this unit comes with dual-sided pedals, a water bottle holder, and a spring ride saddle for added comfort.

The unit also generates its own power, so you don’t need to plug it in. It is also compatible with most apps for iOS and Android, which can allow you to track your progress via any number of heart monitors and health apps.

Nothing is perfect, right?

Conclusion – Should You Go For It?

On the whole, this is a very versatile, streamlined bike that sets itself apart with those 16 levels of resistance and solid performance across the board. It does not have some of the added features other bikes have, but where things really count this bike does quite well, offering a strong exercise experience. The fact you are able to enjoy so much control and work against so much resistance can really make a difference in the nature of your workout.

In short, far from simply “spinning your wheels,” the degree of resistance and workout customization offered by the Diamondback Fitness 1260Sc Studio Cycle can help you feel like you’re really “getting somewhere” exercise-wise.

You can also check our complete guide on affordable spin bikes.