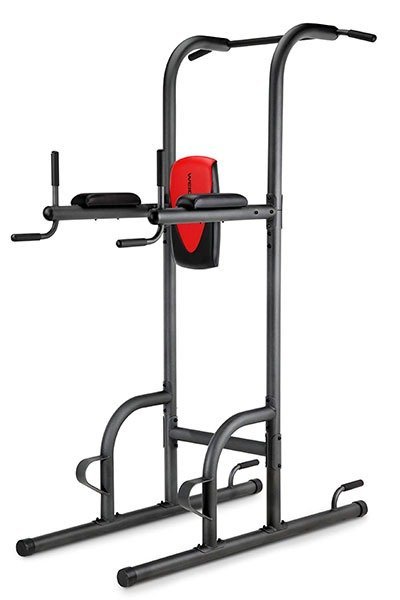 Weider Power Tower is one of the most popular home gym equipment on the market today. If you’re on the hunt for something that will help you focus on your upper body and core, without costing a heap of money, you’ll definitely want to take a look at the Weider Power Tower.

When you think about home gym equipment, what’s the first thing that comes to your mind? For many people, they’ll immediately conjure up thoughts and ideas of beefy, expensive, and crazy powerful machines that are designed for the ultimate, hardcore workout buff. While there’s nothing wrong with this type of equipment at all, it isn’t always the best fit for everyone. These types of machines are often big, bulky, and quite expensive. Again, they’re the perfect match for some people, but not for everyone.

So, what if you’re someone who really doesn’t want the biggest and beefiest home workout machine out there? That’s perfectly fine, but what kind of equipment should you look at? There’s still a great deal to choose from, and because of all the selections available to you, it can often be difficult to determine exactly what machine will suit you best.

Push-Up Station for strengthening your biceps, core, and shoulders.

Pull-Up Station  for adding noticeable definition to your forearms and biceps.

Dip Station for building up muscle in your shoulders, triceps, and chest.

Vertical Knee Raise for isolating your core, allowing you to sculpt lean and mean abs.

The weight capacity for this particular bit of equipment comes in at 300 pounds.

So, after all is said and done, how does the Weider Power Tower stack up? The actual tower itself is rather fantastic. With it’s great durability and multiple exercise stations, this should have plenty to keep you busy. The real issues come into play when looking at the company’s customer service and quality control. These factors may not be all that important to you, but if they are, it could be a bit of a deal-breaker.

Despite these issues, the Weider Power Tower is still an extremely durable and capable addition to your home gym setup.