Thankfully, there are plenty of guides online (you can check mine as well) that will save you some time in your search. If you decided to go for a recumbent bike, then maybe Nautilus R616 is the right choice for you. This review is dedicated to this particular piece of steel.

We have already reviewed several recumbent bikes, including Exerpeutic 1000 and Marcy ME-709. Nautilus R616 is a bit different in several key areas, which will be outlined in this review. So let’s start with the features.

This particular bike comes with DualTrack blue backlit LCD displays that offer 29 customizable training programs. You can also track your performance by syncing the bike via Nautilus Trainer 2 app via Bluetooth. Mixed-reality training can be achieved by using RideSocial app, where you can virtually ride alongside friends.

The bike uses magnetic system with 25 levels of resistance, which can be smoothly adjusted. Padded seat, which is included comes with ventilated back and is adjustable on rails via a knob. 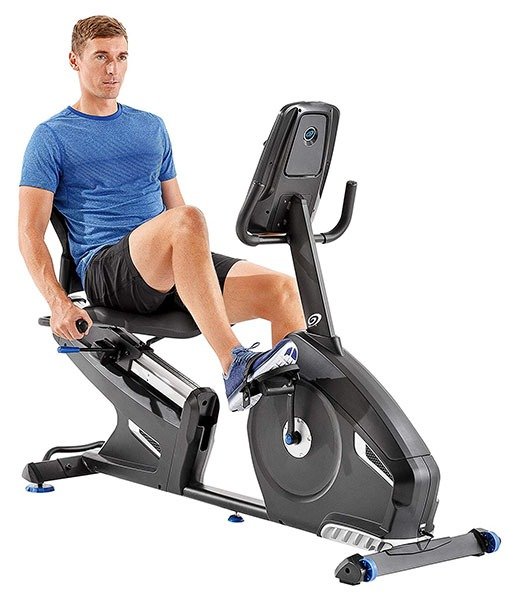 Thankfully, Nautilus is one of those brands that actually provide useful assembly instructions. They are quite clear. Most parts of the bike come pre-assembled. The biggest time consumer is putting the lower part of the bike’s frame together. It needs to be attached to the back and front. Then you can proceed with the seat and seat rails, LCD displays and pedals.

Most verified users agree that the assembly is a breeze and shouldn’t take more than half an hour.

Once you have the bike assembled, I bet most of you folks will be surprised by its sturdiness. Considering that it’s a recumbent bike, the stability shouldn’t be a problem – and thankfully, it’s not.

The displays are pretty cool, they are backlit in blue, which grants good visibility, yet doesn’t hurt your eyes. As mentioned in the features, they can be synced with Nautilus Trainer 2 app. The Nautilus R616’s padded seat, however, gave me a pause. It’s made of molded plastic, which can be a bit inconvenient.

While it is fairly comfortable and accommodates most user sizes, I can imagine that overtime it might prove problematic. Several users actually reported that after several months of use, the seat kept loosening. It is attached through tubular steel to the frame via 4 bolts, which should be sufficient for daily use.

However, it seems that bolts’ quality is not the best and heavier users were able to loosen the seat from the frame every now and then. Simply re-tightening the seat will solve the problem for months to come, but it’s still an inconvenience.

Regarding the adjustability, the bike can be adjusted by using a knob and moving the seat on the rails. The rail design does not allow you to just move the seat farther without moving it higher as well. This shouldn’t be a problem for most folks, though.

The operation of the magnetic system is smooth and quiet. You can easily watch TV while exercising without disturbing anyone in the house.

Conclusion – Is Nautilus R616 Worth Your Money?

Overall, I’d say the Nautilus R616 bike is pretty good. Despite the minor seat flaws, it is one of the better recumbent bikes on the market.