Skip to content
Our team has reviewed two commonly confused workout machines: front-drive ellipticals and rear-drive ellipticals. We'll go over the different benefits and drawbacks of both, and offer a couple of alternatives that you might want to consider instead.
To start, let's go over the various pros and cons both pieces of equipment have going for them. 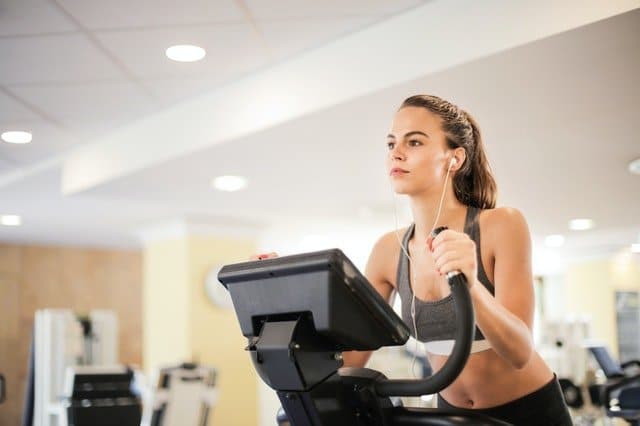 Now, let's take a look at how front-drive and rear-drive ellipticals compare in various categories.

Both machines provide an almost identical potential for weight loss and caloric burn, so we'll focus more on the inherent differences between the two.

The key difference between front-drive and rear-drive ellipticals is the location of the flywheel, the component that provides resistance and continuous motion to your workout.

As you might imagine, front-drive ellipticals have a flywheel located at the front of the machine, while rear-drive flywheels are positioned in the back.

The result of this difference isn't huge, but it impacts the size of the machine and how it looks. Front-drives are more compact, whereas rear-drives tend to be bulkier.

Also, because front-drive flywheels are in front of your feet, you won't have as long of a stride length as a rear-wheel. This can make the machine slightly awkward to use and increase the learning curve a bit.

Front-drive ellipticals typically have higher incline settings than rear-drive ellipticals. This means that you might be able to get a more intense workout with a front-drive than with a rear, giving you a greater chance of burning more calories and losing weight.

However, many people prefer rear-drive models because of the flat incline. It feels more like running outside and requires a more natural movement pattern to operate correctly.

Winner - Based on your preference. If you want more incline, go for front-drive. Want less? Go for rear-drive.

Front-drive ellipticals are known to have more small parts than rear-drive ellipticals. This can make maintenance a bit of a hassle. You might need to replace more parts if the machine breaks down, and more frequently at that.

In terms of initial cost, front-drive ellipticals are almost always cheaper than rear-drives. Their compact size contributes to this, making it cheaper to produce them on a commercial scale.

However, front-drive ellipticals require more maintenance. This can increase the overall cost you might endure in the long run due to breakdowns or part replacements. Rear-drive ellipticals have far fewer moving parts, making them less likely to break down, also driving prices for their parts down.

Winner - Front-drive ellipticals are the cheaper option but may incur more expenses in the long run due to maintenance costs.

In this section, we'll go over some key things to keep in mind when you're working out with your new elliptical.

Rowing machines are great alternatives to any kind of elliptical. While ellipticals provide a well-balanced full-body workout, rowing machines can better increase your strength and endurance.

They are also low-impact machines, so you can use them for extended periods without rest, or if you have injuries that prevent you from performing more intense exercises. Rowing machines are also typically cheaper than any kind of elliptical. They're easier to maintain, and replacement parts are fairly inexpensive.

Rowing machines are a fantastic option for people who like to focus exclusively on their workout with little to no distraction. The movement forces you to tune into your body, while ellipticals are easy to pair with smart devices to workout and binge watch at the same time.

If you're not a fan of ellipticals, no matter where the drive is located, it could be that a treadmill is more your style. Treadmills, especially home treadmills, vary in quality immensely. However, the ones you'll find in your gym are probably on the higher end of the market.

Treadmills impact joints and muscles more intensely than front or rear-drive ellipticals. However, they also push your body more, and users often see fantastic results after running (or walking) on a treadmill for a few months.

Treadmills are an excellent option for people who love running and want a more intense workout than an elliptical might offer.

What is a Center Drive elliptical?

If your elliptical is center driven, then it means the drive system and flywheel are located on both sides of you instead of at the front or back. These designs are much better for tight spaces or space-saving situations.

What are the best elliptical brands?

Some good brands are NordicTrack, ProForm, and Nautilus.

The differences between front-drive and rear-drive are fairly significant, so you should consider all of the above before deciding on one or the other. Both are fantastic pieces of equipment that burn calories and get your heart pumping, but you may have specific needs based on your budget.

Whichever one you choose, we're sure you're going to have a great time working out on an elliptical, whether you're at home or the gym.