Cardio is an important aspect of any fitness routine, and using a rowing machine is one of the most effective forms of cardio in a home gym. Rowing regularly has a lot of benefits; it builds strength, increases muscle mass, improves heart health, sheds pounds, and burns calories. You can dive right in and check out our guide to the best rowing machines for beginners.

If you’re looking for an effective calorie-burning workout, then you’ll definitely want to consider rowing. But what’s the potential for calories burned on rowing machine? Find out here in this detailed guide for weight loss.

Burning calories is one of the most common goals for anyone engaging in an everyday fitness routine, especially when hopeful weight loss is involved. Weight loss and burned calories go hand-in-hand; someone who burns more calories than they consume will ultimately lose weight.

When it comes to rowing, there’s no doubt about the fact that this exercise burns calories. A high quality rowing machine mimics the motion that is involved in rowing a boat, and it’s able to target the upper body, lower body, and core while the body continuously moves backwards and forwards.

Because there’s a lot of movement involved and all major muscle groups are targeted, a moderate-intensity 1-hour rowing session can burn as much as 800 calories. However, the total number of calories burned depends on several factors (more on that later).

Vs Treadmills & Running
Depending on your running intensity, it’s possible to burn a lot of calories on a treadmill, but not as much as you can with rowing. Plus, running has a much higher impact on the joints, so if you’re looking for a low-impact workout, rowing is the better choice when compared to running.

Vs Exercise Bikes
While it is possible to burn an equal amount of calories with intense biking as you would with rowing, this generally isn't the case. That's because rowing is used most frequently in HIIT workouts, where the body continues to burn calories even when the workout is finished. That said, HIIT rowing has a higher calorie-burning rate than biking. 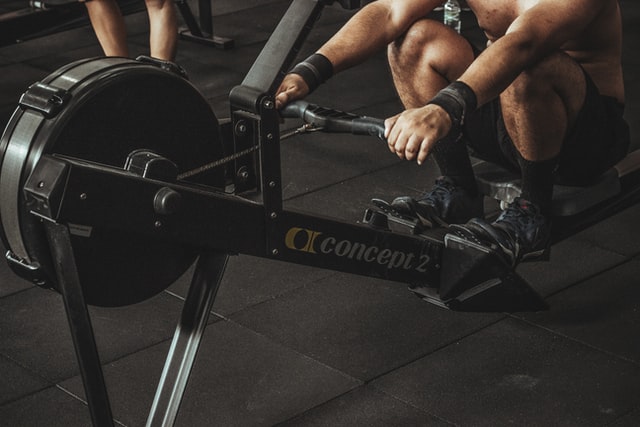 Everyone burns calories at a different rate, even if they’re using the same machine for the same amount of time. There are several factors that impact how quickly our bodies burn calories; some have to do with our physical makeup and anatomy, others have to do with our workout habits.

Here are the main factors that impact the number of calories burned rowing:

Someone who weighs 125 pounds will burn calories at a much slower rate than someone who is 225 pounds. A calorie is simply a measurement of the energy required for your body to move and function. Larger people require more energy during a rowing workout than smaller individuals; therefore, they burn more calories on average.

Your gender plays a large role in how you burn calories. Mayo Clinic says that “men usually have less body fat and more muscle than do women of the same age and weight, which means men burn more calories.”

You can’t expect to burn many calories with a 2-minute rowing workout. You’ll obviously burn more calories (and lose more weight) the longer you row. Of course, you can start out with a simple 15-minute rowing workout, but try to make your way up to 30+ minutes if you want to see optimal results with your weight loss.

The harder you work, the more calories you’ll be able to burn. In other words, you’ll burn more if you push yourself with higher resistance and faster rowing movements than you would if you get off your rowing machine without breaking a sweat. 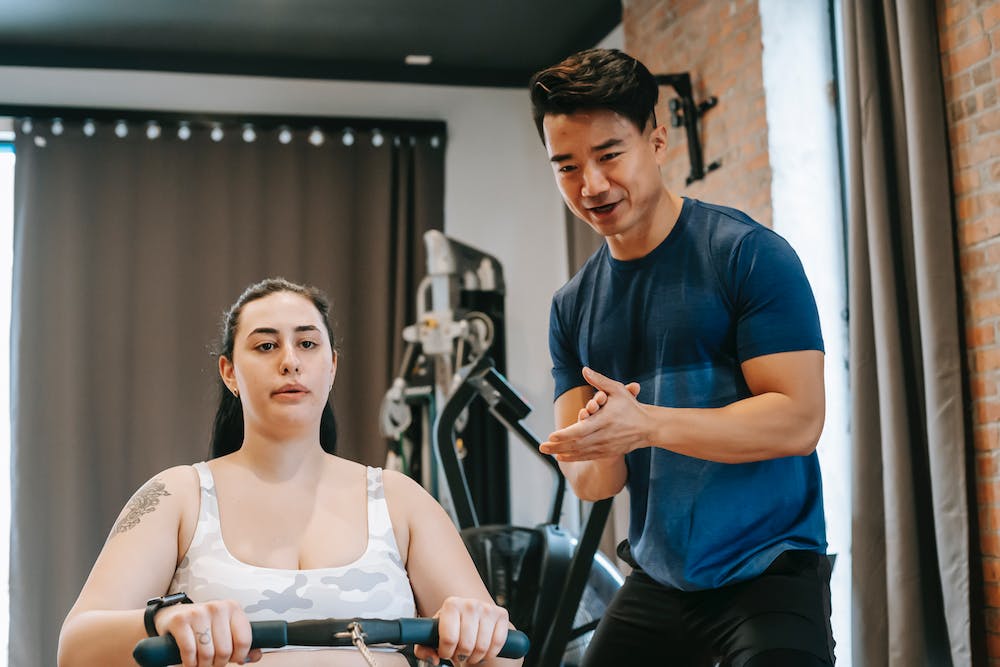 Any legit rowing calorie calculator will use a specific formula to determine how many calories are burned on a rowing machine. That formula is:

MET refers to the total energy cost (in watts) of physical activity for a certain period of time. We won’t go into too much detail on this formula; the main thing to remember when calculating calories burned on a rowing machine workout is that the total number depends on the factors listed above (gender, weight, workout duration, and workout intensity).

The good news is that most rowing machines will automatically count your calories for you, and you should be able to get a fairly accurate answer by inputting your weight, age, and gender. The machine will also factor in the intensity of your workout and how long you row, which are all necessary pieces of information for getting an accurate calculation.

This rowing chart will give you a much better idea of how many calories you can burn over the course of a 30-minute workout based on your weight and activity level.

Keep in mind that the total number of calories listed isn’t exact - you also need to consider factors like age and gender - but it's a relatively accurate measurement of potential calorie-burning while rowing.

Two Main Ways To Train On A Rowing Machine

There are a few different ways to row if you want to see results with your calorie burning and weight loss, but most people stick to these two methods for training on a rowing machine:

Any HIIT workout, including rowing, is great for burning calories fast. In fact, Healthline says that one of the benefits of interval training is that

“HIIT burns 25–30% more calories than the other forms of exercise.”

How To Burn The Most Calories While Using A Rowing Machine

The best way to see results with your rowing workouts is to develop a training program that’s specific to your fitness goals. If your goal is to burn the most calories, then you’ll definitely want to consider HIIT rowing, and aim to row at least 5 times per week.

Here are a few more recommended workouts that have high calorie-burning potential: 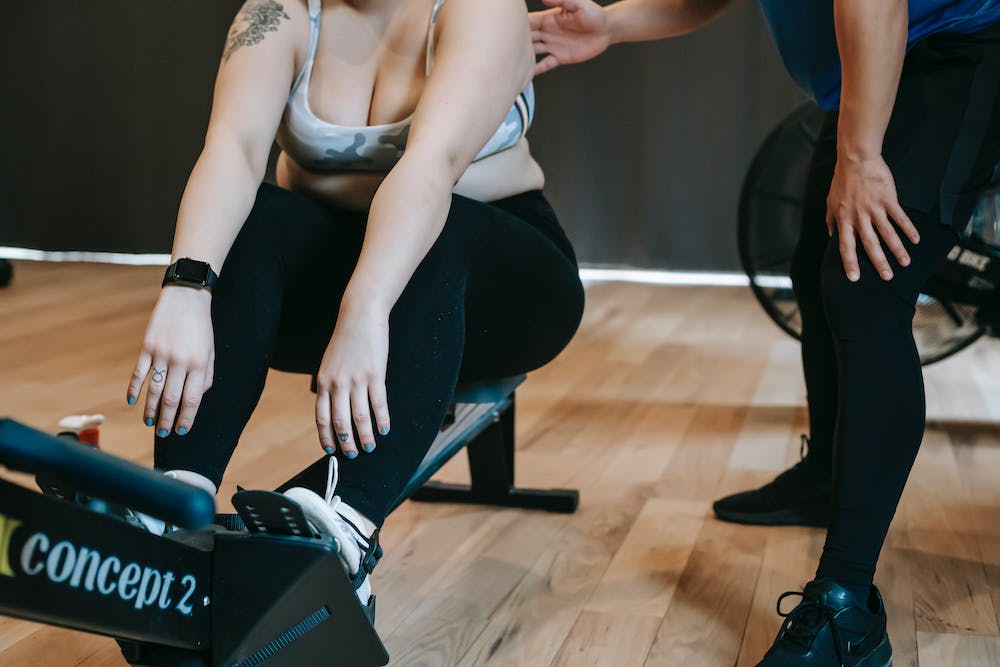 How long does it take to burn 500 calories on a rowing machine?

It depends. Remember, there are a few factors that ultimately determine the number of calories burned, like gender, body weight, and workout intensity. To give you a frame of reference, a 175-pound individual will have to row very vigorously for about 30 minutes to burn 500 calories.

When keeping a moderate pace, most people can row a distance of 1000 meters in about 5 minutes. So assuming you're able to burn 7 calories per minute while rowing (which is fairly standard), you'll achieve about 35 calories burned after rowing 1000 meters.

That means the calories burned after using a rowing machine for 2000m will be double that (70 calories). And as long as you keep up with the moderate-intensity, the calculation for 5000m rowing calories will be about 175.

Can you lose belly fat on a rowing machine?

Absolutely. Compared to other forms of cardio, rowing machines do more to target the entire body, including the core and belly region. As long as you keep a healthy diet and workout regularly, rowing is a sure-fire way to blast away belly fat.

Should I row every day if I want to lose weight?

Concept2, the top-selling brand of rowers, has some really great advice on rowing for weight loss:

“When rowing for weight loss, workout consistency and duration are key. For maximum results, strive to complete 30–50 minutes of rowing five to six times per week. Aim for a comfortable intensity of moderate, steady work where you can still carry on a conversation.”

There are many different types of rowing machines. Some are specifically designed to deliver a more intense workout with varying resistance levels and high-performance weight loss programs. For instance, the Concept2 rowing machines allow you to choose from a variety of preset workouts based on your fitness goals.

Since we all burn calories at a different rate based on our weight, gender, and workout specifications, the average calories burned on a rowing machine will vary across the board.

If your main goal is to lose weight, the official recommendation is that you do at least 150 minutes of moderate-intensity rowing per week or 75 minutes of vigorous rowing. Pairing this activity with a healthy diet and strength training is likely to get you the results you’re hoping for, so why not start rowing today?!