Deciding which type of barbell is right for you can take some thinking. There are many different factors like brand, budget, and type of barbell that you will need to consider first.

In this article, we will explore the differences between a bushing barbell vs bearing barbell. You probably know by now that bearing bars tend to come with a higher price-tag. What makes them more expensive?

Let's have a look.

Bearing bars are the favored bar for Olympic-style lifts. They are best used in fast movements like the clean & jerk and the snatch. With the needle bearing inside, you get a fast spin on each lift which is much better for these types of lifts.

You can use a needle-bearing bar for other more traditional lifts like the bench press, but lifters often complain that they leave them feeling slightly unbalanced due to the smooth spinning action.

Bearing bars also degrade a little bit faster than bushing bars. If you are looking for a bar for your home gym, and you do not do Olympic lifts, you might want to consider a bushing bar instead. 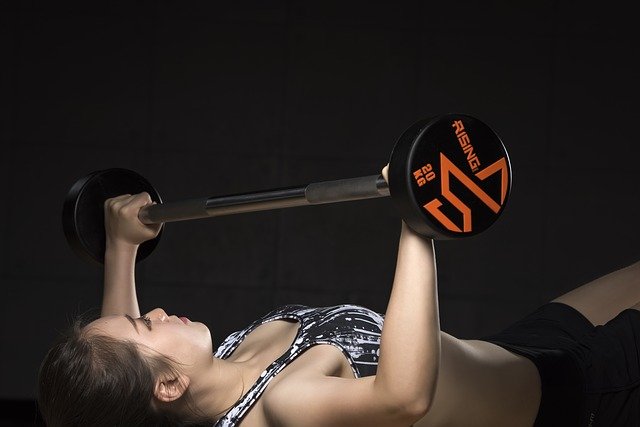 A bushing barbell is the barbell of choice for heavy lifts, powerlifting, and compound lifts like the squat or deadlift.

They tend to have more aggressive knurling on them, which is better for grip when grinding out those heavy reps. Bushing bars still spin like their bearing equivalent, just at a much slower rate.

The bushings inside degrade slightly slower than with a bearing barbell. This makes them a much more popular option and the better choice of the two for those that do not want to do Olympic lifts.

What to Look for in a Barbell

Now you have decided upon the type of barbell that you want to buy, and you can now begin to look at the other important qualities of a good barbell

The tensile strength of your barbell essentially tells you how much weight you can load onto the bar during lifts without it breaking. The higher the tensile strength, the better the barbell construction and quality.

A barbell with 150,000 or below will be a beginner barbell. We highly recommend you avoid these as you will need to upgrade in a relatively short time.

Barbells with 150,000 - 180,000 tensile strength are the sweet spot and will suit the majority of lifters and athletes.

180,000+ is where you get the most premium barbells. These will last as long as you want unless you are loading them with extreme weights. If you want the best money can buy, look for one with this strength.

Knurling is the part of the barbell that you grip. This has to be knurled into the bar during manufacture.

As time goes on, knurling can begin to wear down, leaving less grip. This is one of the reasons why cheap budget bars are not a great idea. They might help your wallet now, but later on, they will be harder to lift with, and you might end up replacing it anyway.

Knurling doesn't have any strict specifications, but you will tend to find that bars come with either "standard," "aggressive," or "Olympic" knurling.

Standard knurling is what you will find on normal bars and is suitable for all lifts.

Aggressive knurling is used on bars for lifts like squats and deadlifts. They have extra grip for high-weighted sets.

A good thing to remember with your knurl is that you should keep it cleaned out as much as possible. If you lift with chalk, it can get stuck in the grooves and cause a lack of grip.

Finally, once you know what type of bar you want and how to tell if a bar is of premium quality or not, you are ready to buy your barbell. There is one final thing you should look out for when purchasing something like this, the warranty.

Every company offers a different approach to this but usually, the higher the price and quality, the better the warranty. High-end bars will come with lifetime warranties which means you can purchase in the confidence that your bar will last as long as you need it to.

Just remember, these warranties don't cover you for dropping the weights in the squat rack or throwing them around the gym.

What is the best barbell for deadlifts?

For deadlifts, a bushing barbell with an aggressive knurl and high tensile strength is best. This will allow for the most stability and will mean you can lift heavier with confidence.

Should I use a bearing or a bushing barbell for CrossFit?

Bearing style barbells are the best choice for CrossFit as many of the movements are similar to Olympic lifts.

Buying a new barbell can be exciting yet daunting. There are so many options that it can be hard to decide which ones are worth it and which ones aren't. Hopefully, we have helped clear some of that up for you, and you now have the knowledge to make an informed decision.