If you are upgrading your personal home gym, or building it from scratch, then you’ve probably thought about weights. As you already know, weights and barbells and general divided into two categories, Olympic and standard.

There are several differences between Olympic and standard barbells and weights, but this guide is not this comparison. Here we will review and compare the 5 best Olympic weight sets that are currently available on the market. 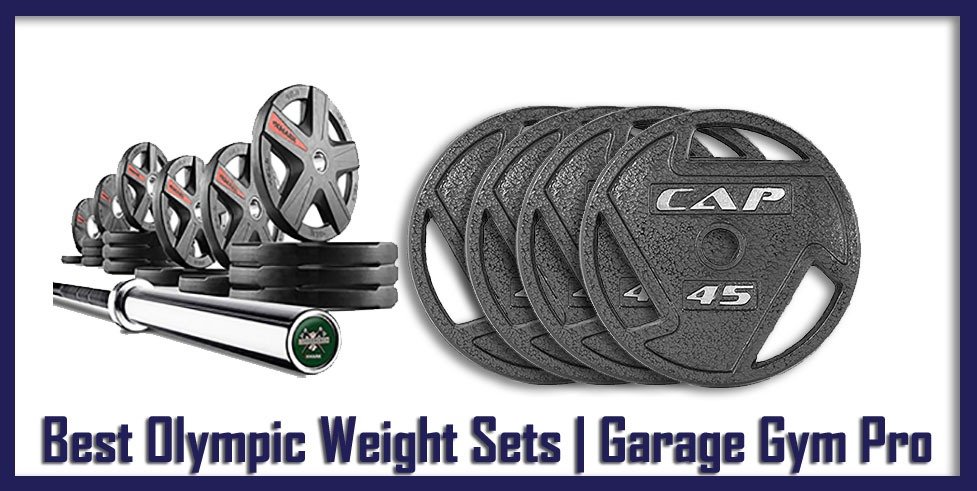 What, Why, and Which?

You might ask, what exactly is included in the Olympic set? By default, it consists of one Olympic barbell and several Olympic plates, or just the plates with several variations. Most of the sets in our guide offer several variations, which will be outlined in the comparison.

If you have decided to go for Olympic weights instead of standard weights, you should consider purchasing a set, since they are often cheaper, rather when purchased separately.

We have scoured the market for about 7 hours to list the very best of 5 Olympic sets on the market. So without further due, here they are.

Let’s start our guide with one of the most famous set available.

1st on our list is another combo from XMark, this time with an Olympic EZ curl bar.

They offer 5 recessed openings for comfortable hold and load. The holes are 2-inch in diameter. Definitely a great olympic weight set currently available on the market.

The set comes in 5 different variations:

2nd on our list of the best Olympic weight sets is manufactured by XMark.

The Lumberjack bar features 28 mm black manganese phosphate shaft, with semi-aggressive knurling with dual knurling marks. The bar is built to last and has been upgraded with brass bushings. The total distance between the collars is 52 inches.

The TEXAS STAR Olympic weight plates come with 5 recessed openings for comfortable hand grip and easy loading. The cast-iron plates are covered with premium rubber casing with over time-dissipating odor.

Next on our list of the best Olympic weight sets is the weight-plates set only by Day 1 Fitness. This set does not have a variation with an Olympic bar, it’s the plate-set only.

The Olympic weight plates are made of heavy-duty cast iron, with standard 2-inch hole. The Day 1 Fitness unique design adds extra comfort; each plate offers 3 handle grip spaces. Each plate has a semi-gloss finish for a professional and clean look.

The plates are sold in two-sets and have five variations:

Cap Barbell brand manufactures Olympic weight plates as well and, as it turns out, they are one of the best on the market.

These fellas are made from solid-cast iron. 3 over-sized holes for easy grab and load are part of each weight plate. Naturally, as with every Olympic plate, these 2-inch hole ones fit on every Olympic bar and on a variety of fitness machines.

They are coated in semi-gloss finish for professional look and corrosion protection. All in all, the Cap Barbell 2-inch plate set is definitely one of the best Olympic weight set on the market.

They offer several sets of two and sets of four variations:

The last, but not least on our list of the best Olympic weight sets is the one manufactured by X Training Equipment.

Plates are designed for low-bounce and high durability, which is very convenient for exercises like deadlift and weightlift. The plates are made of 100% solid rubber, which will protect your floor. They come with standard Olympic 2-inch hole diameter.

They offer 8 set variations in total:

That’s it. There goes our list of the 5 best Olympic weight sets on the market. If you are on a hunt for such a set, don’t forget to check pros and cons of each, this way you might avoid certain unpleasant surprises.  I hope that our guide was somewhat hopeful and… get cracking!