The Yosuda Indoor Cycling Bike recently caught my attention, mainly because of the thousands upon thousands of positive reviews praising this bike's performance. People seem to be loving this fitness machine, so I'm here today to tell you exactly why that is.

Even though the Yosuda brand isn't very well-known, it has made quite the impression thanks to this model in particular. In this review, I'll be laying out all the bike's features, the pros and cons, and whether or not it's worth the money.

So if you're ready to learn all about the Yosuda Indoor Cycling Bike, let's get started!

The bike’s frame is made of heavy duty steel, and Yosuda says that this will "guarantee the stability while cycling." It utilizes a belt-driven system that is a lot quieter than chain-driven bikes, making it a great choice for apartment living.

This bike offers a max support of 270 pounds, so if you weigh more than this, you'll have to look elsewhere.

For a bike that falls in the mid-range budget category, the Yosuda's adjustability is impressive. The handlebars can be adjusted 2 ways and the padded seat has 4 adjustable options with the height ranging from 25 to 35 inches.

The seat is contoured and padded and the pedals have an adjustable caged-toe design, which is great for accommodating different feet sizes.

The Yosuda uses continuous infinite resistance that can be adjusted with a knob located on the bike's frame. I was surprised to find that it features a 35-pound flywheel, which is quite heavy for a bike in this price point.

Heavier flywheels generally lead to a smoother ride, and that's exactly what you'll get with the Yosuda.

The LCD display allows you to monitor your speed, time, distance, odometer, and of course, calories burned. The water bottle holder is a nice bonus (and not so common among exercise bikes in this price point for whatever reason), as is the media tray for holding a tablet or phone.

Other features worth mentioning are the emergency brake lever, the felt brake pad to minimize noise, and a set of transport wheels for easy portability. To top it off, the Yosuda indoor cycling bike comes with a 30-days full refund guarantee and 1-year of free parts replacement warranty.

My Experience With the Yosuda Indoor Cycling Bike 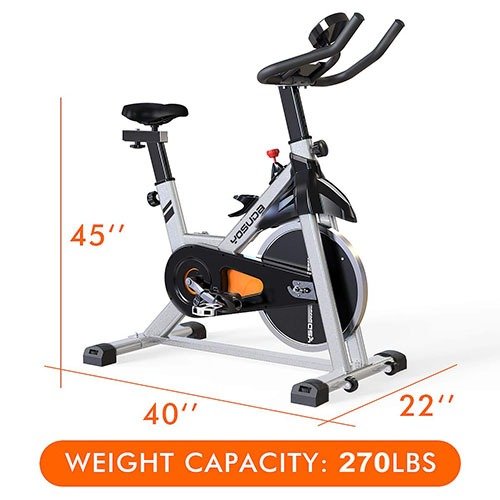 Let's start by reviewing the Yosuda's assembly process. With the provided manual, the bike was very easy to put together. If you refer to the manual with picture diagrams, you should have no problem assembling it in less than half an hour.

From a design point of view, the bike looks good - even as good as bikes that cost much more. The steel frame is indeed as sturdy as advertised with no wobbling or shakiness, even during the final push of my workouts.

Regarding the caged-toe pedal system, the straps seem a bit cheap, but I guess only time will tell if they manage to hold up. The foam lining the handlebars also feel slightly cheap in quality, but I approve of the overall handlebar design. Not only are they positioned well, but the 2-way adjustability caters to a range of different heights.

The padded seat is very comfortable, no argument there. With the 4 adjustable positions, it fits me (5’10”) quite well. With that being said, Yosuda could have been more practical when designing the seat adjustment system. To make adjustments, you have to completely unscrew and remove the seat from the bike frame before reattaching it, which can be annoying if several people are using the bike in the same household.

As advertised, the Yosuda Indoor Cycling Bike runs smoothly and quietly. I was able to use it while watching TV without any problems, which says a lot since my TV is all the way across the room. Gotta love that belt system, am I right?

Another absolute delight is the resistance adjustment system. It can be adjusted during full speed, so you don't have to stop to change it, and thanks to the infinite adjustment levels, it fits every rider's cycling level. I also love that there's an emergency brake, which works by pushing the resistance know (rather than twisting it to make adjustments).

The LCD monitor is pretty standard and looks a bit cheap, but it shows what it should. It's basic, but on the plus side, it's easy to use, so there's not much to add about this feature.

If I want to be completely objective, I have to include both the pros and cons that come along with the Yosuda L-001A model:

Conclusion - Is the Yosuda Indoor Cycling Bike Worth It?

Would I recommend this bike? If you are not above 250-260 pounds and you don’t mind unscrewing and rescrewing the seat to make adjustments, then yes, the Yosuda indoor cycling bike will be a great addition to your home gym.

If you need a bike that can support more than 300 pounds, I’d suggest checking out the D525 by pooboo. Or if you prefer biking in a reclined position, don't hesitate to check out the MaxKare recumbent bike; it's currently one of the best non-commercial recumbent bikes on the market.