My friend moved recently, and it’s turned into a real hassle to get to the gym for him, so this review is written from his perspective. My commute is a long one and in the opposite direction from the gym I belong to, which means that I can’t easily stop on my way to and from work.

I decided to create a home gym. I already had a weight bench and weights and a treadmill, but what I didn’t have was a workout station where I could do dips and pull-ups.

I also really wanted the option of hanging a heavy bag, so I set out to find a product that would give me as much of my wish list as possible. What I found was the Merax Boxing Power Tower – and once I tried it, I knew I had to review it.

Let’s start with the basics. The Merax Boxing Power Tower is a gym-quality fitness station that allows me to do all of the following:

The tower itself is made of commercial grade reinforced steel with a black powder coating.

It has non-slip grips (very important when working out) and cushioned upholstery on the dip station to support your back and provide some relief for your forearms and elbows, as well.

Those are the manufacturers measurements and I’ll talk about whether they’re true in a minute.

My Experience with the Merax Boxing Power Tower 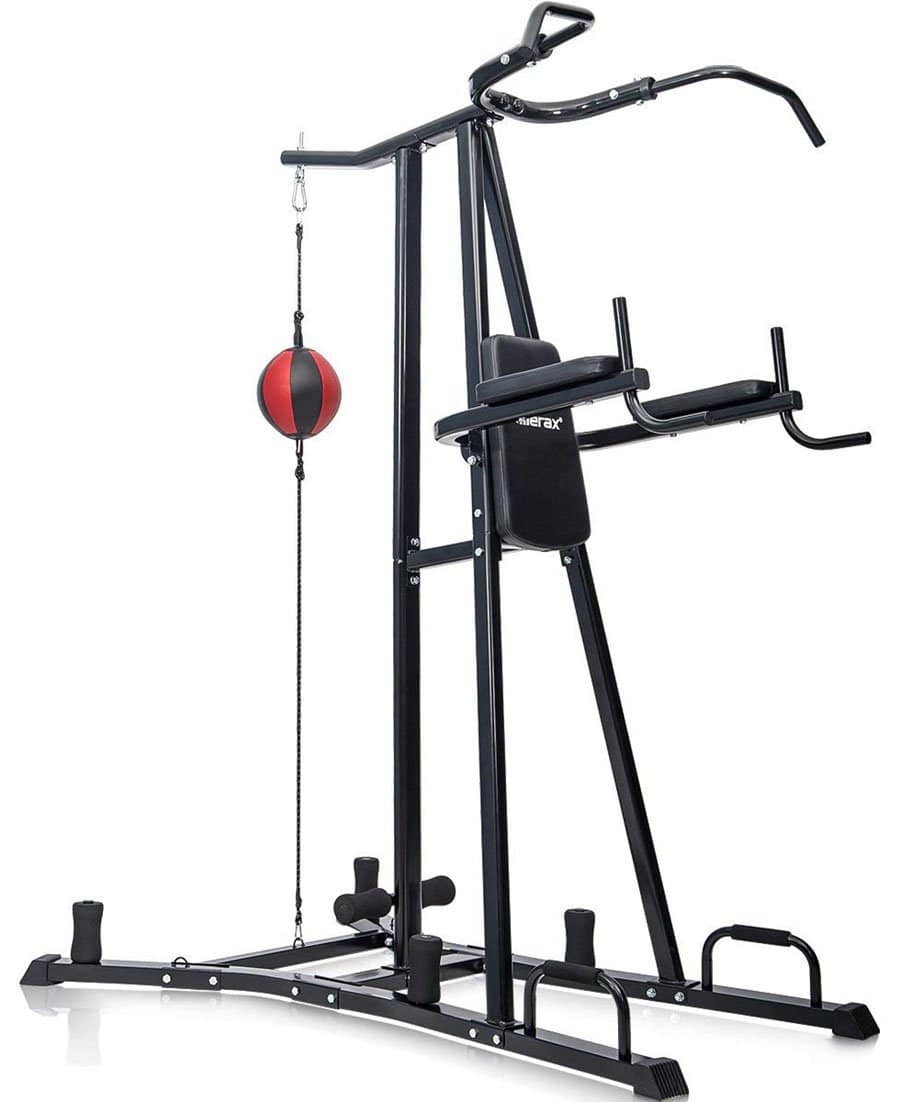 I ordered the Merax Boxing Power Tower online and was eager for it to arrive. When it did, it came in two separate boxes.

I was expecting the boxes to be heavier than they were, which was good for carrying it up the stairs to my gym and challenging for reasons I’ll get to in a minute.

The assembly was very easy. I thought that the included instructions were clear and simple to follow. It took me a little over an hour to get it put together.

The manufacturer’s measurements appear to be correct, although I’ll admit that I didn’t pull out a measuring tape to double check. You’ll definitely need some space around the tower to be able to use all of its functions, so keep that in mind.

I was really eager to give it a try. I had to run down to the garage to get a bicycle pump to inflate the tether ball – the Merax Boxing Power Tower doesn’t come with a pump and the ball is shipped deflated, so keep that in mind if you decide to order it.

I tried the pull-up station first. The bar was a little slippery for my taste, so I added some grip tape and that took care of it. I found it to be sturdy. The tower is supposed to have a maximum weight limit of 285 pounds but I’m nowhere near that.

The frame is, as I said before, lighter than I expected it to be. I can imagine that guys toward the upper limit might want to add some stabilizing weights (and it looks like it would be easy to do that) before using it. 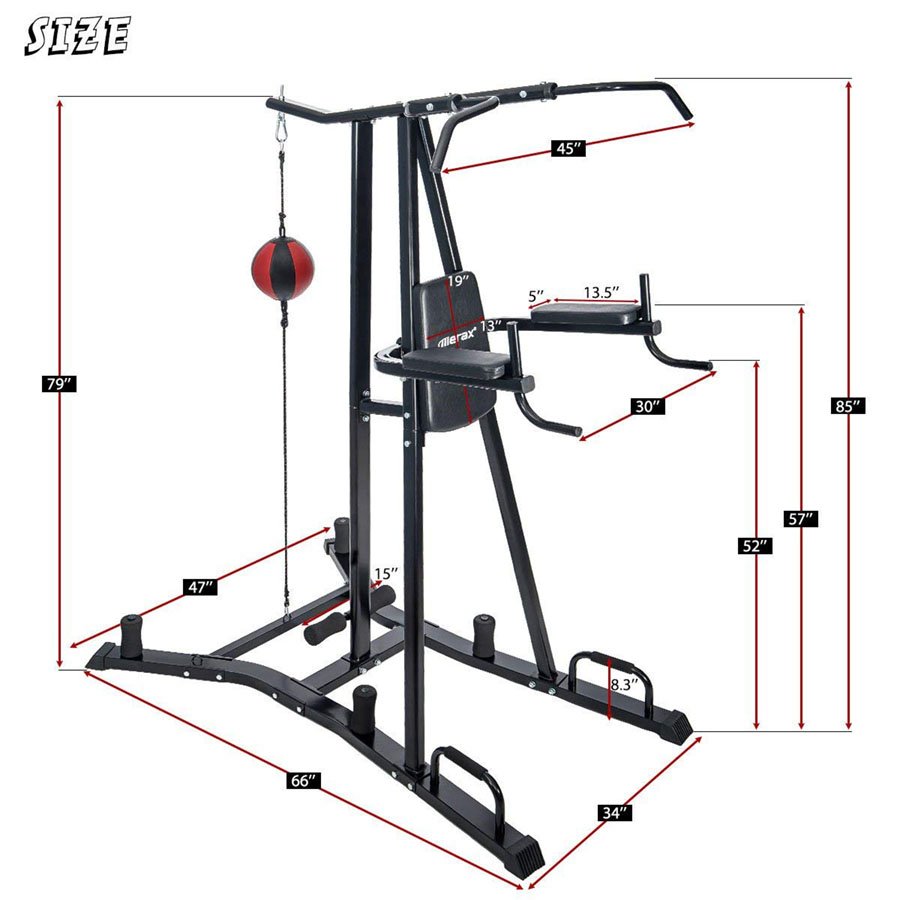 Next I used the dip station. I really liked the cushioning on it, which made me feel supported and definitely relieved some of the strain on my back. Again, I found it to be very easy to use.

I worked my way around to the tether bag. It hangs on a taut elastic rope that gives it a great (and very speedy) rebound. I had that thing hopping!

I already have a heavy bag, so I switched it out and tried that, too.

It handled the 55 pounds just fine. I saw a couple of reviews where people said they hung an 80-pound bag. I might try that, but the manufacturer says 55 pounds is the max for the hook.

The push-up station has a raised, textured bar that was very comfortable grip. It felt stable and enabled me to do as many push-ups as I wanted without worrying that my hands would slip off the bar. That gets an A+ from me.

Another thing I liked was the base bar at the sit-up station. It held my feet in place, and that meant that my abs got a terrific workout – no chance that I was going to get my legs involved with that bar holding them down.

The leg raises and chin-ups were equally as good. Everything felt comfortable and secure. I was able to work out every major muscle group – and some minor ones, too! I was very sore the next day, but in that great way that you know means you got a terrific workout. 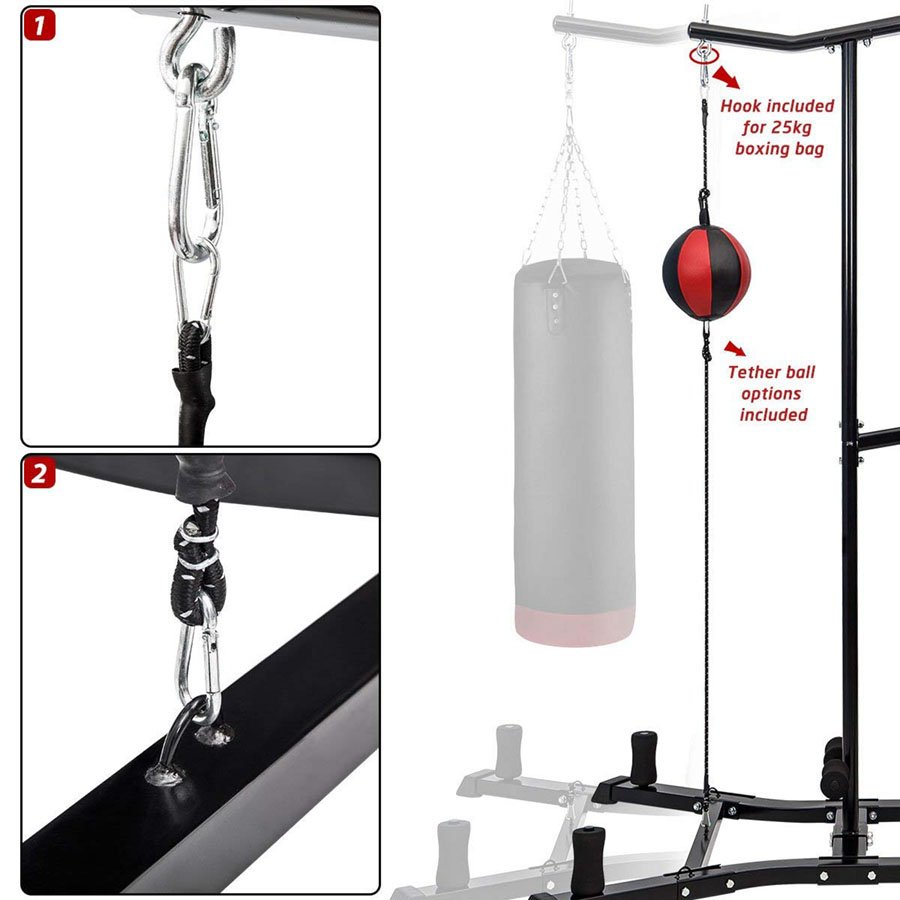 I felt that I got a complete and very intense workout using the Merax Boxing Power Tower. It takes up a lot of space, but I’m lucky enough to have a big room for my home gym so that’s not an issue.

I estimate that you need at least a yard of space on all sides to be able to make full use of the tower’s features. If you have less, you may not be able to do some of what you want to do.

I had a buddy of mine come over to try out the tower too. He’s a little taller and heavier than I am, so I was curious to see how it worked for him.

He found the tower to be good but said he felt that someone taller than him might feel cramped doing certain things. In terms of his weight, he noticed a bit of a wobble and said that if he bought the tower for himself, he’d probably add some weights to give it just a little more stability.

He didn’t really have a problem with it – it was more of a comfort thing than anything else. Still, I’d say if you weigh more than 200 pounds you’re probably going to want the weights.

Every fitness product I’ve tried has its pros and cons, and that’s true of the Merax Boxing Power Tower. Here are my thoughts, starting with the pros:

Overall, my feeling is that the pros outweigh the cons unless you’re such a big guy that you can’t comfortably use the Merax. I found it to be the perfect size for me but as I said, my friend thought that anybody taller than him might have a problem with its size.

My final recommendation is that the Merax Boxing Power Tower is a product that’s worth trying. I’ve had it for several weeks now and I’m getting gym-quality workouts at home. The price is affordable, and since I no longer need to pay for a gym membership, it will pay for itself pretty quickly.