Battle ropes give you a way to work out your arms, legs, and do cardio at the same time. In recent years, battle ropes are very popular for exercise equipment for workout enthusiasts. However, you need to anchor battle ropes before using them.

So we put together this guide on how to anchor battle ropes at home.

Why Do People Install Battle Ropes at Home?

Battle ropes give a versatile way to train your arms, back, legs, shoulders, and general endurance.

They are also relatively easy to install and can coil up out of the way when not in use.

Installing battle ropes is a good way to have a permanent exercise fixture in your home.

However, you need to install battle ropes differently depending on what kind of exercise you are doing. 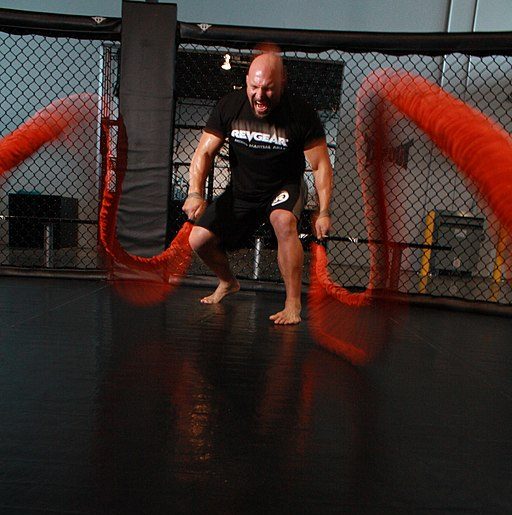 Battle ropes have so many benefits, it's no wonder they are such a popular piece of equipment and can be used for all kinds of exercise, including:

Pulling and dragging battle rope exercises are a great way to work your whole upper body because they engage your core, lats, arms, and shoulders. You can control the intensity of your workout, too, by increasing and decreasing the pace to really push yourself. Some of the best exercises to try are standing pull downs, seated shoulder pulls, and single-arm high pulldowns.

Your grip strength is important for bodyweight exercises and weightlifting. You can use battle ropes to increase your grip strength by performing exercises like a single or double handed rope slam, and you should see an improvement quite quickly. Make sure you focus on having a tight grip on the rope and try to keep the movement controlled.

Climbing is a good way to build a strong back and core and improve your overall flexibility. If you have enough space, you can anchor your battle rope to the ceiling and then climb up and down as part of your workout.

Most people won’t have a high enough ceiling to anchor the battle rope on, but by looping your rope over the top of your power rack or over a sturdy tree branch, you can still use it for climbing exercises. You can then use the rope to perform a battle rope pullup alternative by gripping the rope, pulling yourself up, and lowering yourself down slowly. This will help you build your strength and improve your performance when you go climbing.

Battle ropes are excellent for conditioning and are often used by boxers and other athletes. It's a perfect way to continue training your upper body even if you've suffered a lower-body injury and want to keep your overall fitness levels up. By focusing on the upper body and performing alternating waves, double arm waves, and double arm slams at a fast pace, you can test your fitness and conditioning.

Battle ropes can help you get stronger and get your heart racing which means you can burn calories and make muscle gains. Performing jumping power slams, alternating wide circles, and jumping jacks with your battle ropes will get your heart rate up and improve your overall fitness.

Battle ropes can really boost your body's endurance and strength with minimal risk of injury because the movements are low impact. The squat to shoulder press, bicep wave, and lateral whip will all help you grow muscle, and you should notice a real difference after just a few weeks. It won’t be as effective as using weights, but it will still have a positive impact.

Where Is the Best Place to Anchor Battle Ropes at Home?

You don’t necessarily need anchors, but it can be hard to keep your ropes in line without an anchor. You can also just thread the ropes through some heavy object like the bars of a gate or another object with sufficient weight. 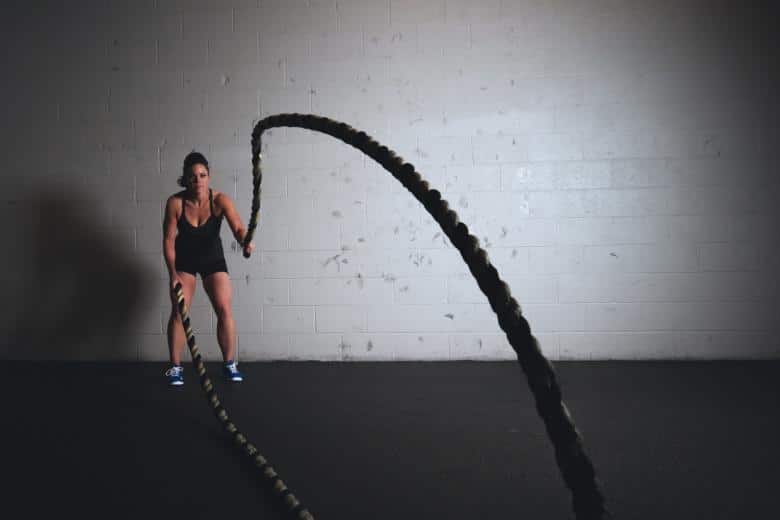 What Equipment Do You Need to Fit the Anchor?

Here is a quick list of what you will need to fit the anchor of your battle ropes.

How To Anchor Battle Ropes At Home: Step-By-Step Guide

You can just anchor your ropes using a heavy object like other fixtures in your gym, such as a power rack or other heavy objects. However, these kinds of solutions are not fit for a lot of battle rope exercises.

So the best option is to install an anchor in your home gym.

The only downside of installing battle ropes indoors is that you might be limited in space. Unless you have a large home gym or you put the ropes in your basement, you may be tight on space for your workouts. You also won’t be able to use extra long ropes while indoors.

Installing battle ropes outside is a similar process; you just need to bolt the anchor onto a wall outside. You can also buy anchor straps to anchor your ropes around heavier objects like a gate.

The main way to install a battle rope outdoors is to implant an anchor in the ground. The anchor can be mounted in the dirt or in concrete, though installing it in the dirt is much easier.

You can install a wall anchor on an outdoor facing wall, but this is often difficult because the wall might be brick or concrete.

3. Setting Up Battle Ropes in a Garage

The last major option is to set up battle ropes in your garage. This is the recommended option as you can open your garage doors and attach larger ropes for more range of motion.

The best way to install battle ropes in your garage is to use a wall anchor.

Battle ropes in the garage are very useful as you can use them indoors and outdoors. Garages tend to have a lot of open space, too, so you will have room for a full range of motions.

4. Anchoring Battle Ropes Without An Anchor

Battle ropes don't have to have a fixed anchor for you to be able to use them, and you can use some of the heavy equipment that you already have in your gym. Power racks work well because they’re secured already, but you can also use a heavy set of weights, a machine in your gym, or even a kettlebell.

The idea is to stop some of the vertical movement and pin the rope in place at one end so you can effectively use it in your workout, so you’ll have to pick something that’s heavy enough to do the job.

If you aren't going to anchor your battle ropes permanently, these are the steps you’ll need to take: 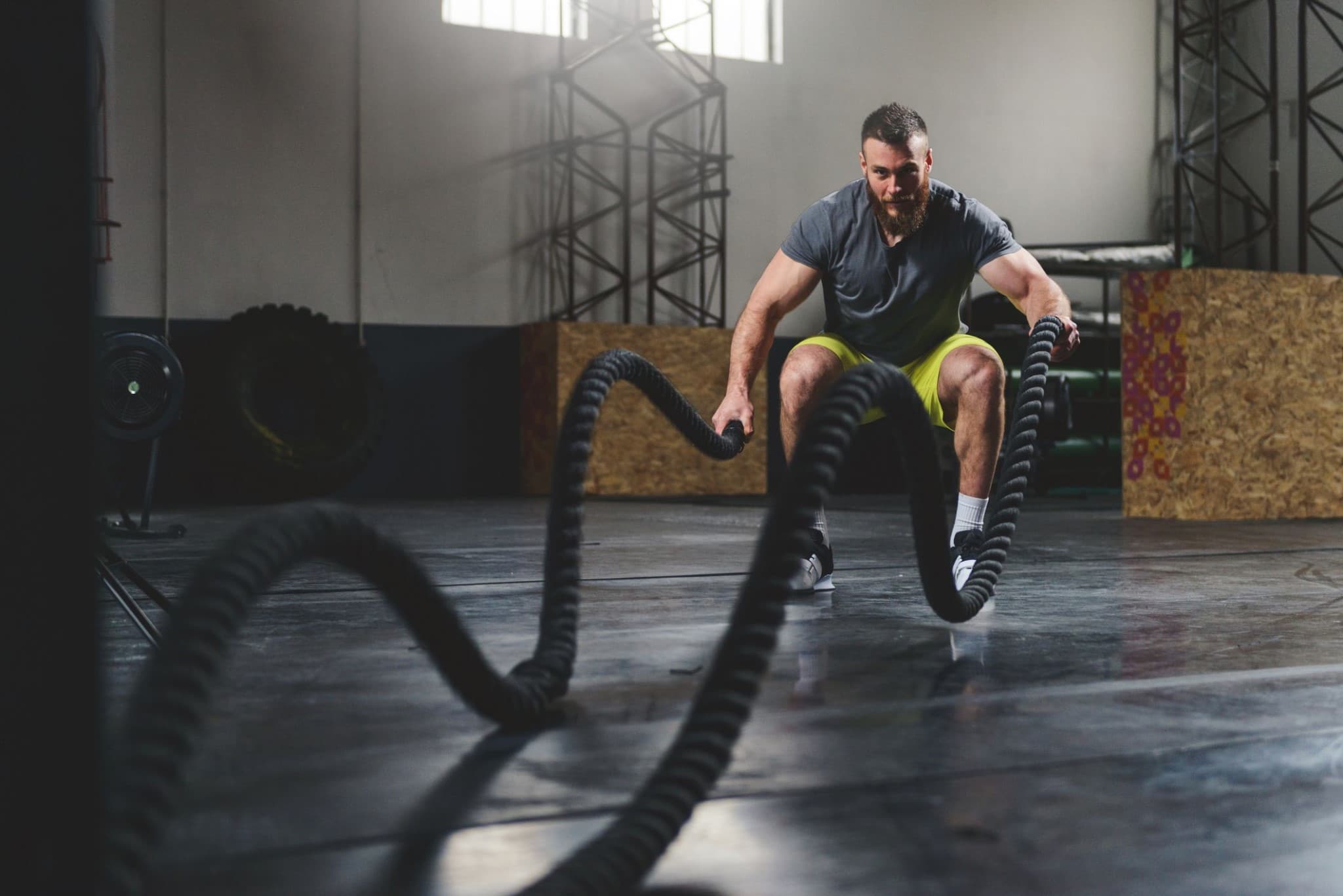 Generally no, battle ropes will not damage floors. However, you should try to use them on solid surfaces like concrete or hardwood. You can also get a rubber mat if you are worried about battle ropes damaging your floor.

How do you protect battle ropes from fraying?

One of the easiest ways to stop your battle ropes from fraying is to attach duct tape to the ends. Duct tape will keep the fibers together. Another way is to buy ropes made from durable fibers.

What can I use instead of battle ropes?

Do you need one or two battle ropes?

You technically need one battle rope. You can loop the single rope around an object and use the two ends, though the rope might be too short then. Otherwise, using two ropes is the better option.

Can you anchor battle ropes to the ceiling for climbing exercises?

Yes, it's perfectly possible to anchor a battle rope to the ceiling, and you'll just have to install a mount to the ceiling rather than the floor or wall. However, you've got to have a really high ceiling for it to be worth it because otherwise you won’t be able to perform many exercises. For most people, it’s not a great place to anchor your battle ropes, and you'll be better off using a weight rack or something heavy to secure it temporarily for climbing exercises.

Battle ropes are a great way to incorporate dynamic and explosive movement into your workout routine. A good pair of battle ropes can train definition, endurance, and overall strength.